The growing use of virtualization in data centers has addressed the need for 10G Ethernet as a way to reduce the complexities when using the existing 1G Ethernet infrastructures. Moving to 10G Ethernet has a number of choice from 10GbE interfaces including CX4, 10G SFP+, SFP+ direct attach copper (10G SFP+ Cu) and 10GBASE-T. However, 10GBASE-T is perceived as a more cost-effective solution for broad deployments, which provides 10 Gbit/s connections over unshielded or shielded twisted pair cables over distances up to 100 meters (330 ft).

Recent market research shows an increased demand in Internet traffic. New applications coupled with the growth of Internet users are driving the need for increased bandwidth. 10 Gb/s Ethernet over structured copper cabling systems can address this demand. The existing structured cabling systems allow to use old equipment and add the latest communication technologies, which help to scale the networks to 10 Gigabit speeds and leverage the investment in installed copper cabling infrastructure. For 10GBASE-T data transmission, both shielded twisted pair (STP) and unshielded twisted pair (UTP) copper cabling systems are applicable. The primary focus of this paper will include the guidance to choose UTP vs STP twisted pair cables for 10GBASE-T network.

Copper cabling remains the medium of choice of network managers for horizontal cabling. Due to the continued predominance of copper cabling, the IEEE P802.3an-2006 standard defined a specification for running 10 Gigabit Ethernet over twisted-pair copper, which is designated as 10GBASE-T. The strength of 10GBASE-T comes from its underlying technology, allowing it to dramatically expand the applications for high speed Ethernet.

10GBASE-T is the fourth generation of IEEE standardized BASE-T technologies which all use twisted pair cabling to provide 10Mbps, 100Mbps, 1Gbps and 10Gbps data transmission. It is backward-compatible with prior generations. Because BASE-T devices have used an auto-negotiation protocol defined by IEEE to determine the capabilities supported by the other end of the link, this backward-compatibility means that upgrades could be performed one end at a time, allowing quick and easy incremental improvement of network speed without changing the wiring or upgrades of equipment.

One of the first applications for 10GBASE-T is to serve as an uplink technology offering high-bandwidth connectivity, from the access or distribution layer to the next point of aggregation. 10GBASE-T promises to be a very successful high-speed networking solution for horizontal copper applications and high-performance networking in the following areas:

What Is Twisted Pair Cable?

A twisted pair consists of a pair of insulated wires twisted together. It is a patch cable type used in telecommunication for very long time. Cable twisting helps to reduce noise pickup from outside sources and crosstalk on multi-pair cables.Twisted pair cable is good for transferring balanced differential signals, which can date back to the early days of telegraph and radio. Twisted pair cabling is often used in data networks for short and medium length connections because of its relatively lower costs compared to optical fiber and coaxial cable. The two types of twisted pairs are unshielded twisted pair (UTP) and shielded twisted pair (STP).

The most commonly used form of twisted pair is unshielded twisted pair (UTP). It consists of color-coded copper wires, but does not include any foil or braiding as insulator to protect against interference. The quality of UTP may vary from telephone-grade wire to extremely high-speed cable. The cable has four pairs of wires inside the jacket. Each pair is twisted with a different number of twists per inch to help eliminate interference from adjacent pairs and other electrical devices. The following figure shows the different categories of UTP cables. 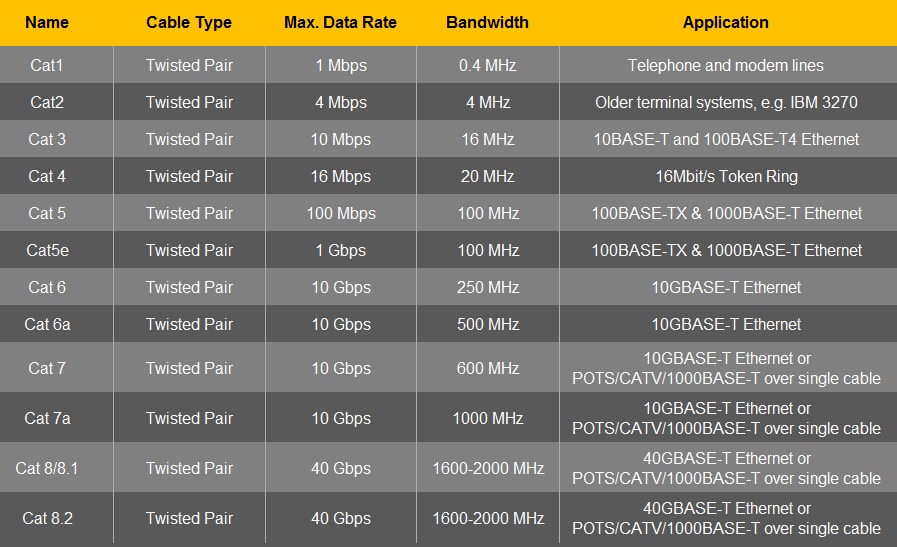 The ANSI/TIA-568-C.2 standard states that category cable must be smaller than 0.354 inches in outside diameter, regardless of whether the cable is shielded or unshielded. Because of the use of space and fillers as a barrier against alien crosstalk, UTP cables tend to be larger in diameter than shielded cables. Actually, many UTP patch cable designs fall close to the permitted maximum diameter. Larger conduit and hanging devices must be used to support UTP cables due to their larger outside diameters. This can add cost to a project as well as necessitate more pathway space for the cables. With an established cable design, the UTP cables are simple to terminate since they do not possess shields and the prerequisite drain wire. This translates to quicker termination times and thus reduced cost. UTP cable and unshielded connective hardware (jacks and patch panels) also tend to cost less than their shielded counterparts.

Shielded twisted pair (STP) is similar to unshielded twisted pair (UTP). However, it contains an extra foil wrapping or copper braid jacket to help shield the cable signals from interference. The additional covering in STP cable stops electromagnetic interference from leaking out of or into the cable. Compared to UTP, STP cables are costlier. But STP has the advantage of being capable of supporting higher transmission rates across longer distances. STP cables are often used in Ethernet networks, particularly fast-data-rate Ethernet.

The other usual STP cables, often called foil twisted-pair cables or screened twisted-pair cables, make use of just a thinner outer foil shield. These cables are thin and more affordable versus the braided STP cable; but they are very difficult to install. Except in cases where the maximum pulling tension and minimum bend radius are strictly observed, these thinner cables may be torn during the installation process. STP cable is used to eliminate inductive and capacitive coupling. Twisting cancels out inductive coupling, while the shield eliminates capacitive coupling. Most applications for this cable are between equipment, racks and buildings. Shielding adds some attenuation to the cable (compared to unshielded), but usually not because in the case of balanced transmission, the complementing signals will effectively cancel out any shield currents, so shield current losses are negligible.

For 10GBASE-T data transmission with distance up to 100 meters, both STP and UTP copper cabling systems are applicable as it defines in IEEE 802.3an-2006 standard. From what we have discussed above, both STP and UTP have their advantages and disadvantages. So which one will you choose for achieving the best performance of your 10GBASE-T network? The following will talk about their performances of UTP vs STP in 10GBASE-T network from the sides of alien crosstalk, termination & installation and costs.

In 10GBASE-T applications, it’s alien crosstalk (the noise source) most limits the data transmission performance over copper cable. Because the 10GBASE-T transceiver can’t detect and compensate for noise from adjacent channels. That must be suppressed within the cabling system to ensure reliable data transmission. This noise is measured as power sum alien near-end crosstalk (PSANEXT) and as power sum alien attenuation to crosstalk ratio at the far-end (PSAACRF). Crosstalk should be measured in a 6-around-1 (namely six cables tightly bundled around a center cable) cabling configuration considering the worst-case effect.

STP cable includes a shield around each individual pair. Another screened STP cable includes an overall shield or braid , around all pairs with an additional foil around each individual shield. The cable design is able to deliver excellent alien near-end crosstalk performance as there is no crosstalk between pairs since the pairs are individually shielded. But at the same time, STP cable is not easy for termination, resulting in more difficult cable management. Because the foil and drain wire in an STP cable must be pulled back and twisted around the cable end prior to termination. And the unused foils should be trimmed. But for UTP cable, it’s designed as unshielded. So the termination takes longer for STP cabling than UTP.

Proper structured grounding processes is useful for protecting personnel and expensive equipment. In data centers, most 10GBASE-T compliant copper cabling is installed. So integrity of the bonding and grounding system must be sound to realize the full performance of the system.

The UTP cabling connectivity doesn’t need complete system bonding. But you should consider the integrity of the grounding of the patch panels and racks to the common grounding point to protect the infrastructure. While for STP cabling system, bonding cable to the connectivity components is required to ensure proper performance. For 10GBASE-T data transmission, you should be careful with the implementation of the power and grounding system that the copper data cable system resides in. If the power or cabling system is not properly designed and/or installed, data rate errors are likely to happen. As 10GBASE-T applications are very sensitive to noise, potential differences in electrical grounds can cause bad influence on 10 GbE data transmission. If there are data rate errors within an STP cabling data network, you should better check the bonding and grounding as well as the overall design of the power and ground system.

The Future of 10GBASE-T

10GBASE-T can dramatically expand the opportunity for 10G Ethernet networking by supporting simpler, cheaper, twisted-pair copper cabling. Broad deployment on 10GBASE-T will simplify data center infrastructure, making it easier to manage servers connectivity and deliver the needed bandwidth. In the near future, 10GBASE-T will eventually become the predominate media choice.